The Glier family from the Vogtland

The family research "Glier" is a posthumous gratitude to my mother-in-law Elena Koeller born Glier. In the eighties my father-in-law Herbert Koeller wrote a chronicle, which largely described the life of the family of Karl Glier and his wife Alexandra Bogdanowitch. Karl, born 1877 in Kiew (Ukraine), had a sister Caecilie and two brothers, Moritz and Reinhold Glier. Reinhold was well known as composer and music-teacher in Russia. The picture shows the family of Karl Glier with his brother Moritz 1928 in Cottbus (Germany). 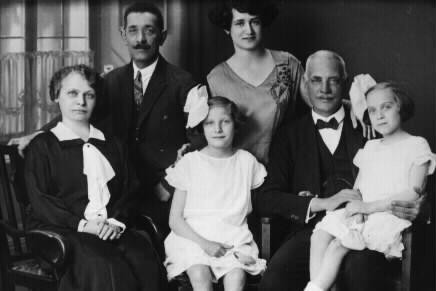 Karl had been arrested at the beginning of the World War I. He was banished to Sibiria, because he was German. His wife Alexandra followed him with the two daughters Elena and Galina. Daughter Eugenie was born in 1917 in Werchne Uralsk during the Russian revolution. After six years of banishment and flight the family came to Germany and lived there till shortly after the end of World War II in Cottbus.

Herbert died in 1984, Elena Koeller died in 1992. When the "Berlin wall" fall in 1989, there was finally the possibility to search the family roots in the "native country" of the Gliers in the Saxon Vogtland. With the help from many Gliers, first from Markneukirchen and Klingenthal then later (almost) worldwide, a large genealogical tree of the Glier family was established back to the 15.century.

The family Glier is well known in the southern Vogtland. There are some outstanding individuals in the family. At the beginning of the 19th century the Glier families lived around Markneukirchen / Klingenthal, then they spread about the half of the world because of the economic conditions and the arising of the manufactoring and trade of musical instruments at that time.

The roots of the Glier family are after Erich Wild in the year 1522 in the Vogtland. Hanns Gluher had been entitled to brew beer in the town of Neukirchen and was assessed in 1542 at "Turkey-tax". Andreas and Martin Glier were councillors around 1625. Lorenz Glier was mayor from 1703 to 1715. Christian Gottfried Glier was the town bailiff (Stadtvogt) from 1777 to 1792, Christian Gottfried jr. was councillor from 1792 to 1828, town bailiff from 1812 to 1828 and mayor in 1829. Gliers in Neukirchen, later called Markneukirchen, wrote a part of town history.

There are also still descendants of  J.G. Glier in Brasil. Two grandsons, Carl Wilhelm in 1881 and Friedrich Wilhelm in 1883, emigrated to Blumenau or Santa Cruz do Sul, RS.

If you find a Glier around the world, the origin of his family is mostly unmistakable from the "Corner of Music" in Klingenthal/Markneukirchen, the region showing special traditions of the manual production of musical instruments. This origin brings out again and again musical talents in the family, may be as a musical teacher, a instrument maker or as an interpreter.

It is however sure that there are Glier's, who haven't their origin in Saxony. A connection isn't proved at least. Letters from some Glier's showed, that Glier's already lived in Czechia, in the surroundings of Olmuetz (Olomuc), in 1620.

Literature, which contents indications to the Glier family (all books are written in German, except Dr. Vogel: it is Polish):